The Asian Alliance for Animals has just sent a letter to the Minister of Culture, Sports and Tourism Nguyen Ngoc Thien calling for a ban on the use of wildlife in circus performances. 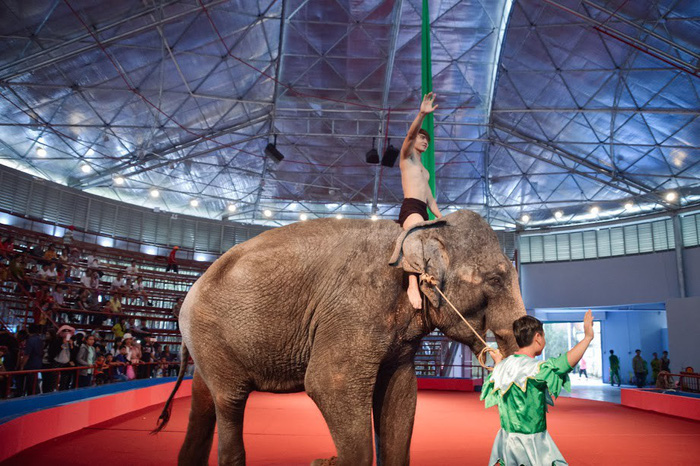 The open letter expresses the Asian Union's deep concern for animals about the abuse of animals in circus performances for entertainment purposes throughout Vietnam.

A letter of the report, recently published by the Asia Animal Organization, said that 19 different animal species are being used to perform in circus venues, including those classified as endangered. according to Vietnamese law.

The report confirms the origin of these animals is also one of the concerns, and according to the information collected by investigators, there are many individuals illegally trapped in these facilities. .

Animals that live in extremely poor conditions, shabby habitats, animal abuse training, are constrained by fear and intimidation to force them to commit non-self-help acts. However, in a state of extreme stress.

The report also shows that there are major concerns about public safety, circus owners do not contribute much to raising public awareness about the instincts of wildlife, or about threats. threatens the number of species they face.

"Vietnam's participation in the use of animals for recreational purposes, when some individuals are thought to be being illegally raised, in poor living conditions and most are mistreated. , will negatively affect the national image in the eyes of international friends, about the ability to protect populations of threatened wildlife as well as the ability to protect them from endurance when abused "message from the Asian Union for animals expressed.

Therefore, the Asian Union for Animals calls on authorities to investigate and verify the origin of all species protected under Decree 32 on the management of endangered, precious and endangered forest plants and animals. Rare, currently used in circuses. At the same time, confiscation and transfer of animals that are considered illegal captures to reputable rescue facilities.

- Prohibit the use of all wild animals in circus performing activities, where animals are forced to perform acts contrary to their natural acts.

- Collaborate with government and non-government wildlife captive facilities to confiscate all circus animals and transfer them to reputable facilities. At the same time support the circus owners to convert to non-animal models.

At the end of the letter, the Asian Alliance for Animals expressed its wish to Minister Nguyen Ngoc Thien to consider and coordinate with the Asian Union for animals to stop the full exploitation of animals at circus performing facilities. .

At the same time, the Asian Union for Animals sent a letter to Mr. Nguyen Phuoc Trung - Director of the Department of Agriculture and Rural Development of Ho Chi Minh City - asking to review the use of animals in circus shows in Dam Sen Cultural Park.

"The use of bears, horses ... for circus performances is for commercial purposes, we believe this practice is against the law," said Dam Sen cultural park.

The Asian Alliance for Animals believes that there is no public record of the origin of these individuals, so it is recommended that FPD verify the origin of the cubs to see if they were caught in the wild. in captivity, or the offspring of a pair of bear parents caught from the wild.

From the results of the investigation, the FPD should take measures to handle this problem in accordance with the law. "The continued abuse of animals in circuses poses many risks to their health and wellbeing. In addition, the use of endangered and rare species in this activity is against the regulations, law of Vietnam".