The Hanoi People's Procuracy completed the indictment and transferred the entire case file to the former Hanoi Customs Department officials for "intestating" ivory and rhino horn, to the City People's Court. Hanoi for research and trial under its jurisdiction. 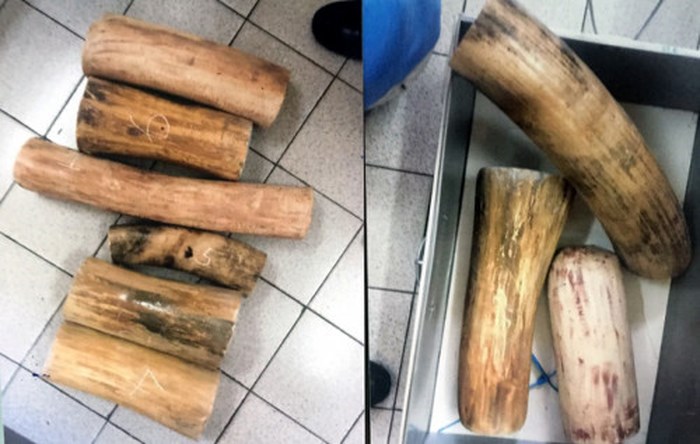 Fake ivory is made of logs instead. Photo: People

In which, two defendants Pham Minh Hoang and Tran Trong Cuong were indicted by the Hanoi People's Procuracy on charges of "Property embezzlement" under Article 353, Clause 4, point a - Criminal Code 2015; Hoang Van Dien was indicted on charges of "trading in banned goods" as prescribed in Article 155, Clause 2, point d - Penal Code 1999.

Hoang is allowed to keep 2 keys in and out of the warehouse and is responsible for monitoring the entry, exit, management, preservation and handling of violated exhibits seized in the customs operation field of the Customs Department. Hanoi city, sign and seal the door lock when importing and exporting material evidences.

While working at Hanoi Customs Department, Pham Minh Hoang knew Tran Trong Cuong. In April 2017, because of the need for personal expenses and the need to pay the debt, Hoang arose to get the ivory from the material store to sell for money.

Hoang discussed with Tran Trong Cuong, asking Cuong to find and introduce buyers of ivory to sell. Cuong agreed and agreed with Hoang: Hoang will pay the broker for Cuong; At the same time, Hoang informed the samples of ivory in the material store, Cuong went to buy fake ivory so Hoang could put them in the store to replace them.

Afterwards, Cuong contacted Hoang Van Dien (who was in need of buying ivory) and introduced Hoang to sell ivory for 7,000,000 VND / kg. Each time the ivory sale was successful, Pham Minh Hoang paid a brokerage fee to Tran Trong Cuong.

To get the ivory from the material storehouse, Hoang arbitrarily broke the warehouse seal, used the assigned key to get the ivory, put in a backpack and sold it to Hoang Van Dien. Based on the sample, quantity and weight of ivory, Tran Trong Cuong ordered them to be made of imitation ivory (made of wood if the ivory were in the form and plastic if the ivory was in the grain). On the next transaction, Cuong will bring a bag of fake ivory to Hoang scrambling to the material store to avoid being discovered and receive an ivory backpack from Hoang for further transactions. In addition to ivory, the police discovered that Pham Minh Hoang also took rhino horn from the material store to sell to Dien.

Investigation agency determined: From the beginning of April to May 2017, Pham Minh Hoang took advantage of the position assigned to 239.57 kg of ivory and 6.14 kg of rhino horn sold to Hoang Van Dien through Tran Trong Cuong, earned 2,904,990,000 VND. Cuong is a broker and directly participates in selling ivory and rhino horn with Hoang. Cuong is also a buyer of fake ivory so Hoang can bring it into the store to prevent fraud. Cuong was paid 200 million by Hoang. Therefore, Cuong conspired "Property embezzlement" with Pham Minh Hoang as a helper. /.